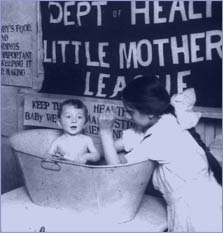 HIDDEN HEROES OF THE HEALTH REVOLUTION

Out of the filth, disease, and poverty of the early 1800s came sanitary reform. One of the more important contributors to the health revolution was the technological-sociological-environmental phenomenon known today as “the sanitary era” or the “public health campaign.” However, getting past the filth took great efforts since sanitary practices weren’t given nearly the same value or importance as they are today.

Today, clean people and surroundings are so much the norm that it’s difficult to imagine an era when they weren‘t. Clean air and water are assumed to be a civic right. Litter-free streets and garbage disposal are traditional responsibilities of local government. Showers, toilets, baths, soaps, detergents, laundries, dishwashers, and vacuum cleaners are common features in our homes. All are associated with good health, good manners, good rearing, good housekeeping, and civilization itself!

“Sanitarians of the mid-1800s believed, quite mistakenly, that disease was caused by “miasmas,” smelly emissions from decaying organic matter.”

But today‘s accepted standards of environmental and personal hygiene are very recent concepts. In the middle 1800s, a wave of disgust against environmental filth swept through Western civilization. The sanitarians of those years believed, quite mistakenly, that disease was caused by “miasmas,” foul smelling emissions from decaying organic matter. For example, swamps and poorly drained farmlands smelled bad in the summer, just when people living near them became sick. Therefore, the sanitarians reasoned that the bad air, or mal-aria, must have been responsible for the illness. They took heroic steps to clean up the miasma sources – water, sewage, factories, and homes.

The sanitarians had experimental proof that controlling bad smells would control disease. Although their reasoning was wrong, their efforts paid off in health benefits. For example, they drained the swamps – coincidentally eliminating the breeding ground of the mosquito carriers. They installed sewage disposal systems, thus breaking the relentless cycle of cholera epidemics. Proper disposal of garbage helped control insects and rodents, which are reservoirs and carriers of disease. It‘s been claimed that the major decline in mortality observed during the late 1800s and the early 1900s was due to innovations in environmental sanitation. Advancements in sanitation worked hand-in-hand with science and social and political activism to move this cause forward.